Would you agree that there are things in life you never question, and just taking them for granted?

It took me about 30 years to think about that specific word, which I have heard and used many times.  As you probably know by now I love letters, especially Hebrew letters, and when I stopped and thought about that word... I was stomped.

And it happened only because Stuart Novick, the writer for Temple Emanuel in Honolulu, asked to interview me about the Parochet I created for their Temple about 30 years ago.

Parochet is that word. I made a Parochet for Temple Emanuel in Honolulu. Parochet was the fabric screen that in the times of the Temple separated between the Hollies of Holly  (the ark) and the Holy which was the Temple.

So, I know what it was used for, but I still don't know about the word itself. I know that every Hebrew word has 3 letters root. But even when I see the three letters root פ  ר  כ   it's still doesn't make sense to me.

You know the phrase... seek and you shall find?

Surprise!  When we are using or hearing the word "Parochet," and we don't know that actually we are speaking Akkadian, an old Semitic language used in the kingdom of Ashur (100-2,500 BC) which is known today as Iraq.

The root of the word means a cover, curtain. Today the Parochet is the curtain in front of the ark. As our Sage Rashi said, it distinguishes between the king and the people.

Parochet is my first word in Akkadian, and making the Parochet for Temple Emanuel was my first one too.

A JEWISH ARTIST, HOLINESS, AND THE MEANING OF AN ARK COVER

Sharona Lomberg, a Big Island Jewish artist, creates works that reflect the sacred bond between heaven and earth. Her art is inspired by the beauty of the spiritual world; the holy as manifested in God’s creation of the everyday. 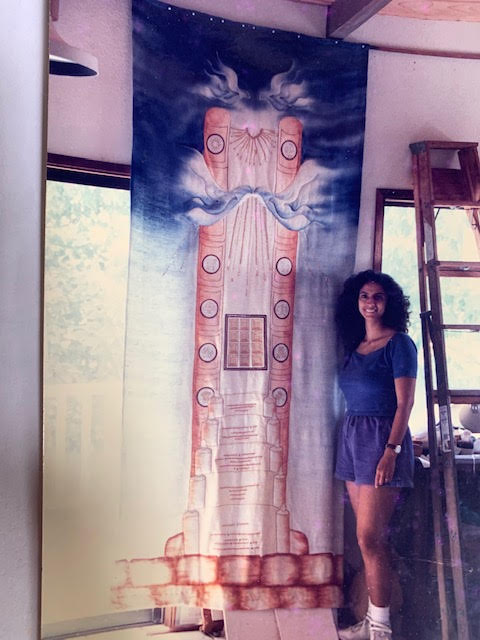 Sharona Lomberg With Her Creation

One of the most transformative beliefs in Judaism is that our deeds on Earth matter to the Devine. The basis of Tikkun Olam is that we are tasked with repairing what is broken so that it functions correctly in both the physical and spiritual worlds. The ark cover that Sharona designed and created was born in a place where these worlds intersect. This significant contribution to the Hawaii Jewish community was commissioned for Temple Emanu-El by Rabbi Avi Maggid and was displayed there until January 27, 2018.

Sharona Lomberg is a Sabra (a Jew born in Israel).  “After serving in the military as a Navy officer,” she said, “I decided to travel and explore North America, a journey that changed my life forever.  I lived in Toronto, Canada where I started designing and painting Tallitot and other Judaica.  That’s also where I met my husband.”

In 1988 Sharona and her husband moved to Kona, on the Big Island of Hawaii.  Along with raising their children, she founded a Jewish educational non-profit organization.  “My goal was to involve the Jewish community and the children in learning and in experiencing the celebrations of Shabbat and the Jewish holidays, to teach Hebrew and the Torah, and to practice Tikkun Olam.  Our organization won awards on both a state and national level.”

Her organization got kids involved in different projects for tikkun olam, including Make A Difference Day, collecting money for other non-profits, and food drives.  For one drive, they wrapped cans of food in red, white, blue, and made a U.S. flag the size of a large wall.   All the cans from the drive were donated to the food bank.  In addition, every year during Tu B’Shvat  (birthday of the trees ) all the children planted trees in the Kaloko forest in Kona.  The parents of the children also took part in those activities, which created a sense of a Mishpach (Family).

Sharona started communicating with Rabbi Avi Magid and eventually brought a group of kids and their families from the small Jewish community on the Big Island to Oahu to experience Temple Emanu-El.  For many, it was the first time seeing a Jewish synagogue.

Previously, with the help of Rabbi Magid, she and her family spent 3 weeks on Oahu while her daughter attended Jewish summer camp.  When Rabbi Magid saw Sharona's work, particularly her painting on silk, he asked if she could do a Parochet, an ark-cover for the Temple Sanctuary.  She agreed.

Everything on the cover has its own meaning.  The structure coming out of the stones of Jerusalem represent the pillars of the Temple of Jerusalem.  The special breastplate worn by the Temple High Priest along with the stones for each tribe is also depicted, symbolizing the connection between the people and the temple.  Four heavenly beings represent the four archangels.  And there is a progression of a Tree of Life showing the journey towards the light.

For those interested in delving deeper into the mind of a Jewish artist whose work is dedicated to expressing the Divine in her work, Sharona was kind enough to share the following:

"Each part and image that is painted and embroidered on the Parochet was done after much thought about combining beauty along with a deep connection to the history and roots of the Jewish people.

Starting at the bottom of the Parochet are the stones representing the Western Wall, the only remaining wall of the Temple in Jerusalem.  Five scrolls are ascending from the Wall.  Each represents one of the five books of the Torah. 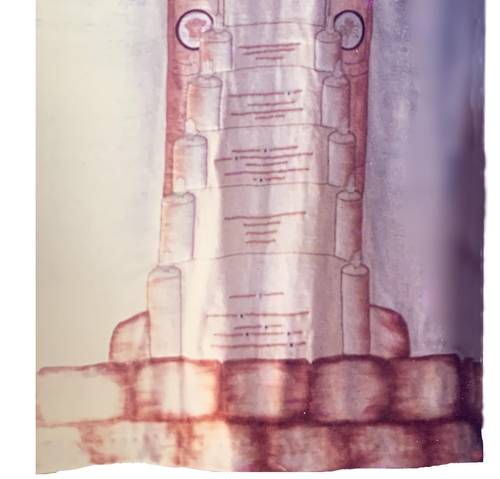 The stones at the base represent the Western Wall

Behind the scrolls are two tall pillars representing the two free-standing pillars in front of the Temple. The pillars were built from “bricks” made from large stones.   The pillars represent the strength and foundation of our people.  Imagine how hard it would be to create a tall, narrow structure built from bricks that are not straight and smooth as pre-formed bricks are today.

The bricks symbolize the Jewish people- the 12 tribes of Israel.  Each brick has a symbol of one tribe, which implies that our strength comes from us being united as one people.  Each one of us is important; our strength is in our oneness- Am Echad.  This sustains our capability to withstand hard times. 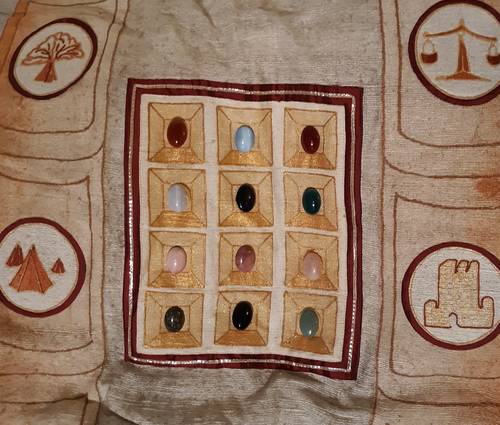 The breast plate with stones and roundels

The blue wings represent the four primary angels.  Four Angels who would later be known as archangels, surrounding God's throne.   As G-d created four winds (directions), four elements, and four banners (for Israel's army), so also did He make four angels surround His Throne—Michael, Gabriel, Uriel, and Raphael.  These angels protect us, each with his own task.  I added another 3 wings to each main wing to create 12, which represent the 12 tribes. 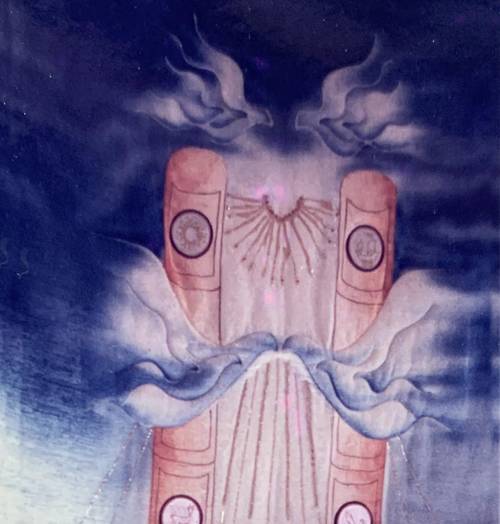 As people and as individuals, each has our own journey in life.  I wanted to depict the spiritual journey from where we are, here on Earth, striving for more knowledge, clarity, and spirituality.  As in the spiritual Tree of Life, we start from the bottom, from Earth, and move towards the light (the highest level  –  Ein Sof).  There are seven main rays coming from above which represent seven days of the creation, which comes from the 18 rays representing the number 18 for Chai – life to the light.

We started from Earth, represented by the bricks of the Wall, and ascended to the creation of us as a people, as a nation, striving towards the light:  From creation to life, to the ultimate light."